The Dutch Edition of “The Little Europe" Launched in Brussels (photos) 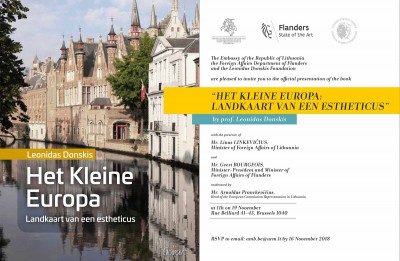 On November 19, the translation to Dutch of Leonidas Donskis’ collection of essays “The Little Europe: a Map by an Aesthete" has been launched at the Embassy of Lithuania in Brussels, Belgium. Photo gallery here.

The Embassy was pleased to welcome so many of late philosopher’s colleagues, friends and like-minded people. Lithuania’s Minister of Foreign affairs Linas Linkevičius fondly spoke about the huge contribution of Donskis in strengthening Lithuanian diplomatic ties through cultural exchange. One of the greatest examples of this was Donskis‘ profound admiration for the Flemish culture which helped bringing Lithuania and the region closer.

Many honourable guests have shared their thoughts on the translation project and inspiring memories of Donskis. Among them: the Minister-President of Flanders Geert Bourgeois, Head of Leonidas Donskis Foundation, philosopher’s wife Jolanta Donskienė, Head of European Commission Representation in Lithuania Arnoldas Pranckevičius, Member of Lithuanian Parliament Arūnas Gelūnas, writer Sergey Kanovich, journalist, one of the “Kaunas – European Capital of Culture 2022” curators Rytis Zemkauskas, the translator of the book Anita van der Molen.